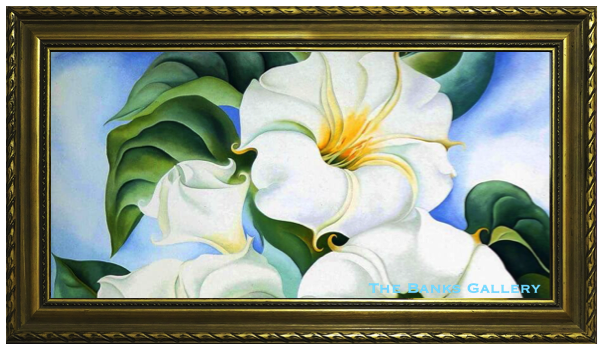 Georgia O’Keeffe was born in Sun Prairie, Wisconsin and was a modernist artist known for her spectacular paintings. She started out producing paintings of beautiful flowers. But later developed her talents to paint American skyscrapers and landscapes too. Her most famous works include Jimson Weed, Black Iris, Oriental Poppies, Cow’s Skull: Red, White, and Blue, Sky Above Clouds IV, The Black Place, The Lawrence Tree, Red Canna and Ladder to the Moon. Her most valuable painting (in the time of writing) is Jimson Weed which was sold for an outstanding $44.4M.

Jackson Pollock was a major figure in the abstract expressionist movement. He was a painter born in Cody, Wyoming. His most famous works are Mural, Blue Poles, Number 1 1950 (Lavender Mist), Convergence, Autumn Rhythm, The She-Wolf, Full Fathom Five, Shimmering Substance and The Deep. Unfortunately, Pollock died at a young age at 44. He still had lots of paintings to bless the world with. Therefore, his paintings are in very high demand are rarely on sale. His most valuable painting A classic “drip” sold for an outstanding $140 million. It’s believed to be the worlds most expensive painting!

Edward Hooper was a realist painter born in Upper Nyack, New York. He was mostly known for his spectacular oil paintings but was a fantastic watercolourist too. His most famous works include Nighthawks, Automat, House by the Railroad, Early Sunday Morning, Chop Suey, Gas, Rooms By The Sea, Cape God Morning, Room in New York and Morning Sun. Hooper also made a record-breaking sale with his painting Chop Suey which sold for $92 million at an auction.

Jean-Michel Basquiat was born in Brooklyn, New York and was mainly known as a contemporary artist. She had a unique painting style and produced graffiti-like images. Basquiat’s success as an artist rose in the1980s, which was when she became part of the Neo-expressionism movement. She has many famous works! Such as Untitled, Crown, Horn Players, Charles the First, 50 Cent Piece, Warrior, Irony of Negro Policeman, in Italian, Boxer Rebellion and Riding with Death. Her most valuable artwork was Untitled which sold for an incredible $110 million at auction.

Mark Rothko was an abstract painter born in New York. He was mostly known for his distinctive brightly coloured irregular rectangular blocks. He became a key figure in American minimalism and modern art. His most famous works included No. 1 (Royal Red and Blue), Orange and Yellow, No.61 (Rust and Blue), Multiform, No. 14, Entrance to Subway and Slow Swirl at the Edge of the Sea. His most valuable piece of artwork was Orange, Red, Yellow which sold at $86 million.

Roy Lichtenstein was a pop artist born in Manhattan, New York. He was the founder of pop art! And his artwork became very popular during this new art movement in America. Throughout his career, he painted over 5,000 paintings. The most popular include Whaam!, Drowning Girl, Crying Girl, Look Mickey, Brushstrokes, Masterpiece, In the Car, Girl with Ball, Landscape, Crak! and As I Opened Fire. His most valuable piece of artwork was Woman with a Flowered Hat which sold for $56 million. However, it is rumoured that Steven Choen bought his 1992 masterpiece off Agnes Gund for an outstanding $165 million.

Norman Rockwell was a painter born in New York. He was undoubtedly Americas most popular artist during the 20th century. He has a unique style of exaggerated realism painting real-looking people and situations. His most famous works include The Problem We All Live With, Freedom from Want, Freedom of Speech, Freedom from Fear, Freedom of Worship, Saying Grace, Golden Rule, Triple self-portrait and Girl in the Mirror. His most valuable artwork is Saying Grace which was auctioned for $46 million.

Winslow Homer was a famous landscape painter born in Boston, Massachusetts. He had great talent in drawing, wood engraving, oil painting and watercolour painting. His most famous works include The Gulf Stream, The Fog Warning, Snap the Whip, Breezing Up (A Fair Wind), The Herring Net, Prisoners from the Front, The Veteran in a New Field and Northeaster. Bill Gates bought Winslow Homer’sLost on the Grand Banks painting for $36 million in 1998. This figure set a record during this time period!